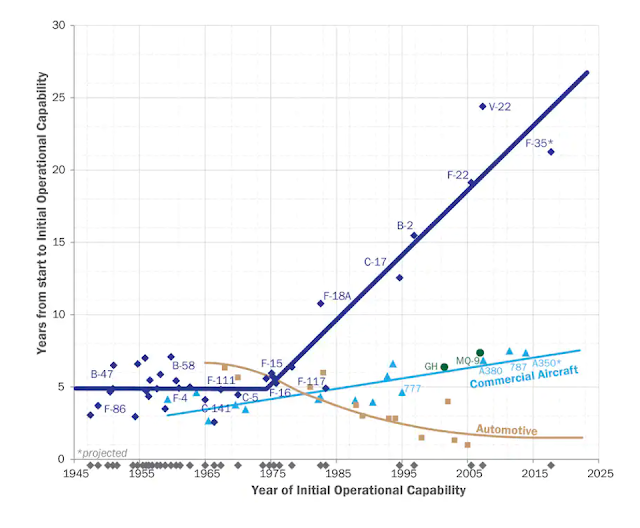 The U.S. military is getting worse and worse at procuring new major weapons systems. The chart above is from a Washington Post piece that starts its discussion with the problematic roll outs of the K-46 aerial refueling tanker aircraft and the F-35:

Only in February did the military begin using Boeing’s KC-46 tanker, developed to replace the 1950s-era KC-135, on a limited basis. After a decade of development, and 20 years since the Pentagon first launched efforts to field a new tanker, the plane has still not been deemed ready for combat. A leading general recently described it as a “lemon.”
Even more well known is Lockheed Martin’s F-35, the stealth fighter whose two decades of development have been plagued by setbacks and mechanical problems. The plane, which costs between $77 million and $100 million apiece, has yet to hit full-rate production. The chairman of the House Armed Services Committee called it a “rathole.”

China, the piece notes, setting up an adversary to give urgency to its argument now that Russia has faded in its military primacy, does better.

The problem certainly isn't confined to Air Force procurement discussed in the article either.

The U.S. military's poor track record of development and procurement of new major weapons systems is one reason that the U.S. continues to produce, or keep in service, old systems that are no longer optimal for their missions.

The Air Force is currently even seriously considering bringing back an upgraded version of the F-15, because of the reduced buy of the F-22 that was supposed to replace it, and the exploding costs of both the F-22 and F-35, even though the new F-15 won't be significantly cheaper per unit than the F-35 even at its currently inflated prices.

Consider the $7.5  billion per ship Zumwalt class destroyer which one analyst described as "an unmitigated disaster" that was terminated after just  three were built (and has a main gun for which no ammunition has ever been designed).
Consider the two classes of Littoral Combat Ships in the Navy (the Navy has already decided to put the first four of them in reserve status after the new designs entered service in 2008 and 2010 respectively; the entire Freedom class meanwhile has a serious design defect with its transmission system), both of which were abject failures.

Further back, the Seawolf submarine, while impressive in capabilities, was a procurement disaster that was terminated early with just twelve built after the price tag grew to $3 billion each (after $3.5 billion for the first one) "making it the most expensive SSN submarine and second most expensive submarine ever, after the French SSBN Triomphant class."

The latest U.S. aircraft carrier, the U.S.S. Ford, has stumbled along the way as well, although not quite as badly. Construction began in 2005 and it was delivered in late 2019, at a final cost of just over $13 billion, but serious "punch work" remains:

According to a GAO report in mid-2020 the Gerald R. Ford was still reporting significant problems with the operation of its weapons elevators, while a DoD report in early 2021 stated that the ship was still not combat-ready, citing continuing problems with the Electromagnetic Aircraft Launch System (EMALS). Designed to achieve 4,166 aircraft launches between operational mission failures, instead it went 181 launches between failures, "well below the requirement".

The Navy finally gave up trying to build a viable frigate of its own and is now buying a variant of a French design that is already in production.

The Army has had trouble developing next generation armored ground vehicles that it hasn't fully replaced since the 1980s.

Moreover, just looking at the projects that eventually happened understates the problem because many of the U.S. military's major weapons systems in my lifetime were stillborn, with the programs terminated before any operational units were produced, after great costs overruns, delays, and failures to perform as promised.

The Army cancelled the Bell ARH-70 Arapaho, a four-bladed, single-engine, light military helicopter designed for the Armed Reconnaissance Helicopter (ARH) program in 2008.
The Army cancelled the Boeing–Sikorsky RAH-66 Comanche stealth armed reconnaissance and attack helicopter, following decades of development, in 2004, after spending nearly $7 billion on development for the helicopter.
The XM2001 Crusader self-propelled howitzer program was cancelled in 2002 before any of the 480 units the Pentagon has planned to buy for $11 billion entered service.
The Navy's McDonnell Douglas/General Dynamics A-12 Avenger II carrier based attack aircraft program was cancelled in 1991.
The Army's M247 Sergeant York self-propelled anti-aircraft gun was cancelled in 1985 after eight years of development before entering service.

Even when programs have made it into production, many, such as the B1-B bomber, the B-2 bomber, and the F-22 fighter, the Seawolf, the Littoral Combat Ship, and the Zumwalt destroyer have each been produced in far smaller numbers than initially anticipated. It looks likely that the F-35 will continue this streak.

Hum... Part of the issue is difficulty of negotiating the procurement regulations and getting Congress on board. I'm pretty sure from personal experience as military Comm engineer that it's impossible to be fully compliant with procurement regulations. Luckily for the projects that don't attract Congressional or IG scrutiny most everyone is happy with best effort.

PS. I was working B-52 at Boeing for the $640 toilet seat fiasco. I don't think any of the accounts that I have read match the story we heard internally. Essentially the AF ordered a bunch stuff on an end-of-FY purchase order. One the items was high cost (an engine?) and the rest were low value. Then we applied the contractual mark up (20%?), took the profit and divided it by the number of items, and applied that cost to each item. All as called out by the pertinent procurement regulations.

Does anyone have access to similar graph for the rest of the world? Is it DoD? Is it Western? Is it everyone?

A possible strategy might be: If you are real-real rich the best strategy might be to drive the cost of armaments as high as possible so that only a limited number of potential opponents can reach near-peer level. But watch out for game changing technological advances!

We just need a good war.
Look at the development history of the P-51.