The Power of Clarity

The web comic Misfile illustrates a point that is a powerful one in litigation and conflict resolution generally: clarity of proof can be extremely powerful.

The scene as set as two of our main characters, both high school girls (actually, it is a bit more complicated than that, but those issues aren't relevant to this post) and neither of whom has any prowess at fighting, head to the parking lot after a late night burger and fry session where they encounter two imposing men with bad intentions who make increasingly less veiled threats until their not very imposing high school friend appears and confronts the men (1, 2, 3, 4, and 5).

Our hero is clever, however, and does have a cell phone, which saves the day as illustrated below in the scene's climax: 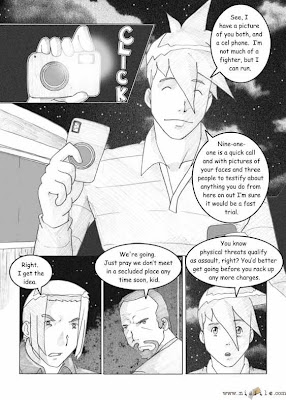 Mangaka Chris Hazelton isn't breaking new ground in this twist. I've seen it in popular fiction half a dozen times, but it really does work in real life, and I've seen this general insight used with success in media reports of real life lawsuits, cases that I've actually worked on, and in day to day disputes that threatened to escalate over the years quite a few more times than I have in action movies and police procedurals.

While there are fine points of the law that are resolved in appellate courts, often to address instances when the facts or law are ambiguous, the law can be an extremely powerful and predictable tool when the facts are crystal clear and that law that applies to those particular facts is not ambiguous.

Video recordings and DNA evidence, for example, have led to an surge in cases where police misconduct is identified and punished, where innocent defendants who are convicted are exonerated, and where guilty individuals are identified and convicted of serious crimes. Likewise, as a general rule, the value of private investigators who can develop a clear set of facts in a case, is greatly underestimated.

Clear facts mean that presumptions that protect powerful interests don't work. Clear facts mean that the party with the facts in their favor doesn't have to compromise in settlement negotiations. Clear facts permit litigators to present a smaller number of simpler legal theories rather than hedging their bets due to factual ambiguities with multiple theories.

A great deal of the way that economic transactions are structured can be explained by a desire to create a compact set of completely unambiguous, easily proven facts should there be a need to bring suit as a result of the transaction. For example, when a purchase is financed with credit, the underlying purchase of goods or services for money is typically separated from the promise to pay a third party lender with whom the only material issues are the terms of a promissory note or credit agreement, the amount lent in documented non-cash transaction, and the payments made in documented non-cash transactions. By segregating disputes about the underlying purchase from disputes about the debt, the resulting lawsuits become simpler. Lenders also tend to lend predominantly in low dollar amount transactions that can be litigated with the expedited procedures of limited jurisdiction courts, or in transactions with collateral where the collateral can be seized in at least partial satisfaction of the debt without judicial process or with an expedited and standardized foreclosure process. Moreover, because the judicial process poses such a low barrier to enforcement of an obligation in a situation where the facts are clear, it is often not necessary to resort to that process at all to secure compliance.

Messy aspects of economic transactions can be and are litigated. Business people sometimes extend credit to their customers, linking the credit arrangment and the underlying transaction, and dissatisfied customers sometimes bring suit when the goods and services they receive are unsatisfactory. Some deals are inescapably complex, multi-party arrangements. Accidents happen in ways that are not foreseen and not well documented but serious nonetheless. But, these make up a decided minority of cases that are litigated in the civil courts.
Posted 11:21 AM
Email ThisBlogThis!Share to TwitterShare to FacebookShare to Pinterest
Tags: Civil Procedure, comics, Criminal Justice, Technology