There's A Prophet In The House, But Maybe Not Me 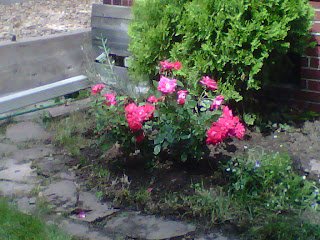 I like flowers, a lot. I'm not very knowledgeable about them, but ever since I spent about four months living with a florist as an exchange student in high school, I've been hooked. Every time I drive to work, or take the kids to soccer, or drive to the grocery store this time of year, I can't help but to ooh and ahh at the summer flowers that have come into their seasons peak, now that the bulbs and annuals of earlier in the spring have receded into the background a little. In particular, I am awestruck by the amazing rose bushes that dot the landscape of Denver's urban residential neighborhoods.

Indeed, roses are one of the few truly unifying themes of Denver's flora. The presence or absence of trees in a neighborhood turns out to be as accurate a measure of a neighborhood's prosperity in this city as payday loan shop frequency. New developments sport fancy, water efficient grasses and wildflowers as part of xeriscaping efforts. Institutional office building owners tend to have a thing for geraniums and mums. But, roses are ubiquitous, from West to East, North to South, almost all of Denver's neighborhoods have them, dotted irregularly in select houses placed prominent in front of houses, on boundary lines and climbing up back fences. Pink ones, red once, orange ones and yellow ones. Compact bushes and sprawling abundant vines. The rose bushes at the Byers-Evans house next to the Denver Art Museum are more than a century old.

Rose are to flowers what jazz is to music. Growing them isn't necessarily trendy, just as jazz isn't necessarily cutting edge, but it has appeal with every ethnicity and with people from 11 to 101. They are enjoyed by conservatives and liberals, but modernists and traditionalists, and just about anyone else.

The trouble is that in addition to not being very knowledgeable about them, I also don't have much of a green thumb.  More often than not, my gardening efforts are epic fails, despite the encouragement and help I receive from my more talented neighbors.

My dear wife is a better gardener than I am, but has different preferences. Practical woman that she is, she prefers herbs and vegetables to flowers. Flowers just aren't her thing and she isn't inclined to devote much effort to my frivolous decorations.

So, once or twice every year, I am the one who makes an effort to plant some flowers with varying degrees of success. Some years it is pansies and marigolds. On two previous occasions it has been rose bushes which promptly died. Every once and a while I have a little success that keeps me going. Last fall, I planted bulbs and all but one of them actually bloomed this spring.

This year we'd been preoccupied earlier in this spring. Our lawn was eventually fertilized and mowed a few weeks behind schedule. Our vegetables and herbs had finally gone in the week before. And, this year, for father's day, I figured that instead of going on a hike in the mountains, or watching a movie with the kids, we'd plant rose bushes. Planting rose bushes that might still be their when they have kids of their own would certainly be more memorable and would also be a better quality way to spent time with them.

So, we spent the morning traipsing across town to find our treasures. But, my daughter, ever the prophet of doom, having not forgotten the debacle of last year's effort in which our dainty new collection of freshly planted flowers was destroyed by the first bad hail storm of the year informed me:

"Dad, it's going to hail and tear all the petals off your roses. It's karma."

The weather, while clouded, wasn't that foreboding in the morning, I'm not that superstitious, and I was more worried about whether our BBQ plans would be rained out than a hail storm. So, I ignored her dire warning, and by early afternoon our two beautiful rose bushes were nicely settled in the garden plot in front of the front picture window in our living room.

Needless to say, four hours later, the hail came down with a vengeance in raisin to almost acorn sized lumps for a good half an hour or so, followed by about twenty-eight hours of rain (notwithstanding the protestations of our newspaper of record which claims that there was no measurable precipitation on Sunday).

The rose bushes survived, badly battered, and perhaps the rain will allow them to recover and last in the long run. But, given the circumstances, maybe I'm wrong about who in our household is the real "Wash Park Prophet."
Posted 10:24 AM
Email ThisBlogThis!Share to TwitterShare to FacebookShare to Pinterest
Tags: Denver Neighborhoods, Humor, Parenting, personal reflections, Predictions