One of the things that makes me most proud is that my children, who have been raised non-religiously, have each been publicly recognized for their good character both in elementary school and again middle school.  My daughter, in her pitch to become the President of George Washington High School's National Honor Society (spoiler: she won) told her audience that "service is my thing."

More children are “growing up godless” than at any other time in our nation's history. . .

Far from being dysfunctional, nihilistic and rudderless without the security and rectitude of religion, secular households provide a sound and solid foundation for children, according to Vern Bengston, a USC professor of gerontology and sociology. For nearly 40 years, Bengston has overseen the Longitudinal Study of Generations, which has become the largest study of religion and family life conducted across several generational cohorts in the United States. When Bengston noticed the growth of nonreligious Americans becoming increasingly pronounced, he decided in 2013 to add secular families to his study in an attempt to understand how family life and intergenerational influences play out among the religionless. He was surprised by what he found: High levels of family solidarity and emotional closeness between parents and nonreligious youth, and strong ethical standards and moral values that had been clearly articulated as they were imparted to the next generation.

“Many nonreligious parents were more coherent and passionate about their ethical principles than some of the ‘religious' parents in our study,” Bengston told me. “The vast majority appeared to live goal-filled lives characterized by moral direction and sense of life having a purpose.”

[N]onreligious family life is replete with its own sustaining moral values and enriching ethical precepts. Chief among those: rational problem solving, personal autonomy, independence of thought, avoidance of corporal punishment, a spirit of “questioning everything” and, far above all, empathy. . . .

[S]ecular teenagers are far less likely to care what the “cool kids” think, or express a need to fit in with them, than their religious peers. When these teens mature into “godless” adults, they exhibit less racism than their religious counterparts, according to a 2010 Duke University study. Many psychological studies show that secular grownups tend to be less vengeful, less nationalistic, less militaristic, less authoritarian and more tolerant, on average, than religious adults. . . .

Secular adults are more likely to understand and accept the science concerning global warming, and to support women's equality and gay rights. . . . Atheists were almost absent from our prison population as of the late 1990s, comprising less than half of 1% of those behind bars, according to Federal Bureau of Prisons statistics. This echoes what the criminology field has documented for more than a century — the unaffiliated and the nonreligious engage in far fewer crimes.

Democratic countries with the lowest levels of religious faith and participation today — such as Sweden, Denmark, Japan, Belgium and New Zealand — have among the lowest violent crime rates in the world and enjoy remarkably high levels of societal well-being. If secular people couldn't raise well-functioning, moral children, then a preponderance of them in a given society would spell societal disaster. Yet quite the opposite is the case.

From the Los Angeles Times.

Note also, with respect to the prison population, that the average incarcerated person is younger than the average adult, because most crimes are committed by adolescents and young adults. A random sample of U.S. adults with the same age and ethnic makeup as the population of adults incarcerated in the United States is much more likely to be religiously unaffiliated than that general population of the United States which includes a much larger share older adults who are much more likely to be religious.

If your intuition is that this is a case of high socio-economic class values, or ethnic values, transmission from parents to children, you are mostly, but not entirely, wrong.

Non-Hispanic whites and people who are more educated or more affluent, are more likely to be secular.  But, the differences in likelihood of being non-religious along class and ethnic lines are far more modest than most people would naively assume.

For example, people who are religiously "unaffiliated" make up about 20% of whites, 16% of Hispanics and 15% of African-Americans.

The breakdown (from the same source) by education is as follows: 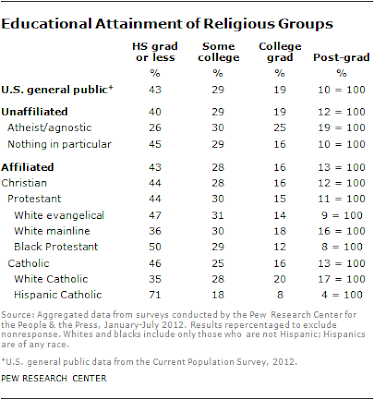 The breakdown by income is similarly, only modestly tilted towards affluence relative to the general public: 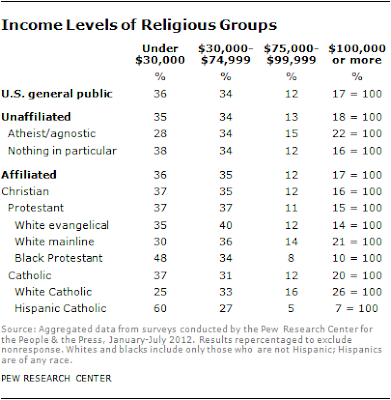 Secular population of the United States is much younger than the religiously affiliated population of the United States, however. "A plurality of atheists and agnostics (42%) are ages 18 to 29, and just 9% are 65 and older. By comparison, about one-fifth of the religiously affiliated (18%) are ages 18 to 29, and a similar portion are 65 and older (19%)." 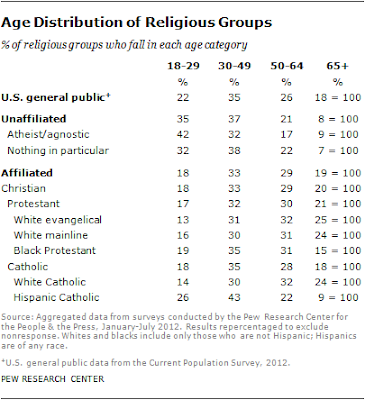 What Do Secular People Believe?

About three in ten people who are not religiously affiliated specifically identify as atheist or agnostic.

About one in ten religiously unaffiliated people are looking for a religion that is right for them, but haven't found it yet.

About four in ten religiously unaffiliated people consider themselves to be "spiritual but not religious."

The likelihood that someone without a religious affiliation will have spiritual or supernatural beliefs not commonly viewed as religious in the United States (e.g. believing in astrology, ghosts, or the existence of magical spells) is roughly the same as the likelihood that religiously affiliated people hold such beliefs.
Posted 2:55 PM
Email ThisBlogThis!Share to TwitterShare to FacebookShare to Pinterest
Tags: Crime, Criminal Justice, Demographic Change, Morality, Parenting, personal reflections, Race, Religion, Social Class