In an unexpected announcement President Trump announced that the U.S. has plans to buy ten icebreakers. The U.S. Coast Guard currently has two operational large ice breakers over 45,000 tons, and there are three smaller ones in the U.S. with three under construction. Russia has six ice breakers over 45,000 tons and 40 smaller ones, with 11 under construction. Some of Russia's ice breakers are nuclear powered. (Notably, while Russia has largely cast away communism, Russia's nuclear corporation, Rosatom, is still state owned and non-profit, which seems to be a good business model for this particular market sector that other nations would do well to emulate.) 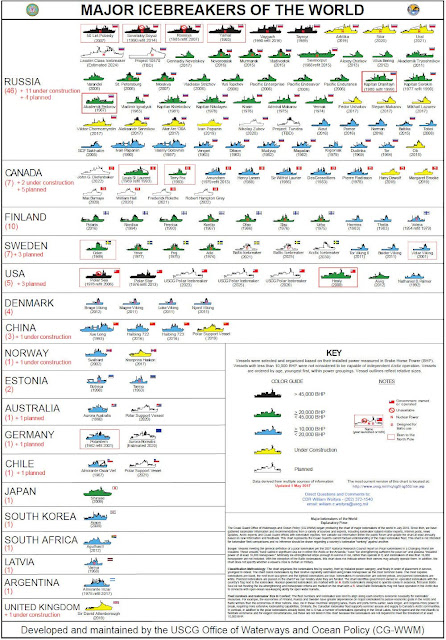 Meta note: One category of knowledge I like to acquire is familiarity with subject with a small and finite number of examples, like knowledge about the world ice breaker fleet, which allows you to rival experts in knowledge in the area quickly.
Posted 1:34 PM
Email ThisBlogThis!Share to TwitterShare to FacebookShare to Pinterest
Tags: Economics, Military, Nuclear, Technology, transportation