Sadly, I Know What This Means 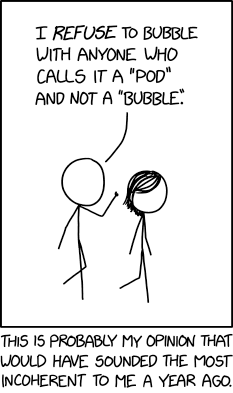 I'm not sure what to google for this one, are there any work safe descriptions of what this refers to?

"During the coronavirus pandemic, various degrees of household self-isolation were often asked of people, depending on location, once it became understood that there was a virus spreading through contact/proximity vectors.

As the initial surge of cases appeared to decline, in places where such drastic restrictions had been implemented and seemingly had prevented ever higher infection rates, many regions decreased the strictness of these measures. For instance, permitting any two households (neither having signs of symptoms) to meet with each other and only each other, or allowing one person in a multi-occupancy residence to invite just one other person to reassociate with. Further relaxation of rules may have occurred since, with the caveat that even one case of COVID-19 discovered in such a co-isolating group of people should be considered a risk factor to every other member (however the local jurisdiction deals with that).

A common term for the larger social unit, not to overlap with any other expanded social unit, is a 'bubble', perhaps to imply that you can only have membership of one bounded bubble at a time (unlike an Euler diagram). The term ‘build your bubble’ was coined by Dr Ingham (University of Otago, New Zealand) as a way of encouraging people with disabilities to create safe ‘bubbles’ with care givers during lockdown. Another common term is 'pod', representing the closed nature of a pod. There is probably as much variation across the world about what podding or bubbling practically means as there is between any two instances of those podded vs. those bubbled. Some sports leagues have resumed play in these structures, with the media using the bubble terminology, both in the United States and across the wider world, as players and commentators alike resume some degree even of international competition (so long as they follow the 'bubble' rules).

Despite the semantic inconsequentialities of the difference, here Cueball clearly expresses a personal preference that he would probably not like being kept in an enforced social situation with someone who uses the other term.

Randall realizes that, despite his tendencies towards strong opinions on semantics, this particular point is one he would have been highly unlikely to say a year ago, and probably would not even have understood what it meant, because he could not have foreseen the COVID-19 pandemic and its widespread impact.

Cueball was shown using a literal bubble (a hamster ball) in 2331: Hamster Ball 2, but evidently got tired of being rolled around by the neighborhood kids.

The title text refers to travel restrictions. Many countries have placed limitations on its citizens' travel, particularly in and out of that country. Canada has mandated 14-day self-isolation on anyone who has returned from out-of-country, and has strictly limited any attempts to leave the country, with the United States being specifically noted as a high-risk tourism destination. Randall jokes that such measures are only 99% meant as COVID-19 precautions, with the remaining 1% being due to the authorities sharing Randall's semantic opinions."