The conclusion isn't surprising, but empirical evidence doesn't always confirm intuition so its worth studying. The sample is from Denmark where centralized national health and educational records make a large scale study like this one (N=30,982 with detailed information on grades, genomes and mental health diagnoses on each subject) possible.

In my life experience, mental health issues are the predominant reason that someone with upper middle class upbringing and intelligent parents, who often aren't low IQ themselves, struggle to achieve socio-economic success. I've seen this scenario many times and it is an important focus in estate planning now that tax consequences are no longer a dominant consideration. 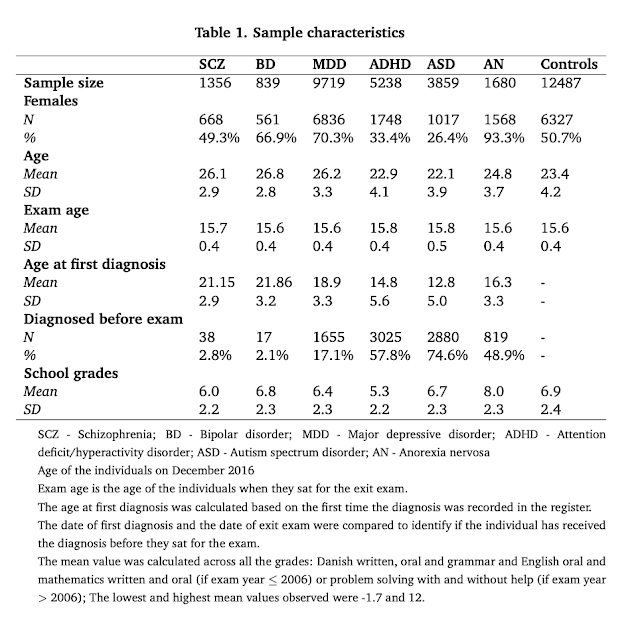 Individuals with psychiatric disorders tend to modestly underperform academically relative to individuals without them (even before they are diagnosed with the condition), although  the eating disorder anorexia is an exception to that rule (possibly because they are overwhelmingly female and females tend to perform better than males in school grades, on average).

ADHD and ASD present much earlier than schizophrenia and bipolar disorder, which helps explain why they have more of an impact (although the ASD impact is surprisingly small). Major depression usually (although not so universally) presents later and is episodic rather than chronic, so it is likewise unsurprising that this has a smaller impact. Some of the depressed impact of bipolar and major depression, and the elevated impact of ADHD and ASD may be due to gender as well.

Honestly, the impact of these mental health conditions on academic performance in Denmark is quite a bit smaller than I would have expected.

Individuals with psychiatric disorders perform differently in school compared to the general population. Both genetic and environmental factors contribute to such differences. Existing studies on the association of educational attainment polygenic score (EA-PGS) with school performance were based on individuals from the general population and it is unclear if the results can be generalized to individuals with psychiatric disorders.

Overall our analyses suggest that results from studies on the associations of genetic and environmental factors with school performance in the general population cannot be fully generalized to individuals with psychiatric disorders.

Personal request here. I have a younger (grade school) relative that is obviously ADHD but not on meds. The psychiatrist in the family is dead set against using meds for moderately functional cases. Have you ran across any papers that would be on-topic for making this judgement call? (Not asking you to do free research or make actionable suggestions.)

I can probably find something. I am very familiar with the topic. If properly diagnosed the benefits are well demonstrated. I could quick resource would be to skim through my past blog posts on the topic which often reference relevant papers at: https://washparkprophet.blogspot.com/search?q=ADHD

Another good resource is the Science Daily website which has press releases from almost new scientific papers that are notable to and understandable by the general public: https://www.sciencedaily.com/search/?keyword=ADHD#gsc.tab=0&gsc.q=ADHD&gsc.page=1

Google scholar is another good resource.

There is also a big literature on the hereditary component of ADHD which might be useful. The diet evidence, IMHO, isn't very credible. There isn't much doubt that exercise helps but the case is strong that by itself it isn't sufficient. Cognitive behavioral therapy likewise can help but not by itself.