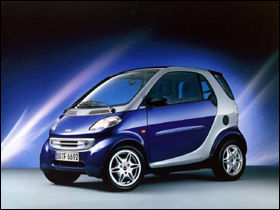 Ask and you shall receive. Last month, bemoaned the lack of a decent commuter car in the U.S. market. Someone must have been listening. It turns out, that a few days later that Denver Business Journal reported that just such a dealership is coming to Denver.

The auto dealer is negotiating a lease for the metro area's first SMART car dealership at Interstate 25 and East 58th Avenue in Denver.

He hopes to open that location, with a 20,000-square-foot showroom, in a matter of months and has plans for other Front Range dealerships. . . . their manufacturer, DaimlerChrysler AG, said it plans to start selling the cars here in early 2008. Auto retailer UnitedAuto Group Inc. will distribute the cars and develop a U.S. SMART dealership network.

DaimlerChrysler hasn't sold the cars here because they haven't met U.S. emissions standards. SMART autos currently for sale in this country come from direct importers, and are adapted to meet those standards. . . .

The SMART car even is a star of the movie "The Da Vinci Code," taking Tom Hanks and Audrey Tautou down Paris sidewalks.

Tripathi plans to soon open a SMART car dealership in Colorado Springs on East Bijou Street, west of Academy Boulevard, and would like to have one in Boulder. . . .

Elizabeth RV offers SMART's two-seat ForTwo Passion coupe models for $26,500 to $27,000. This spring, the dealership sold 20 of the cars in two months.

The ForTwo, SMART's smallest model, measures 8 feet long and less than 5 feet wide, allowing it to fit in half the standard-size parking space. With a turbocharged engine, it can get as much as 60 miles to the gallon.

Previously, SMART cars were only available if imported and converted for emissions issues by a company called ZAP.

This does fit in the same market as the New VW Beetle and the Mini, but is remarkably, and seemingly unreasonably, expensive. The reason for this isn't obvious.
Posted 2:37 PM
Email ThisBlogThis!Share to TwitterShare to FacebookShare to Pinterest
Tags: Automobile Industry, transportation

The Smart Cars are already available in the US from ZAP www.zapworld.com ZP (NYSE). A California based company who is also planning on brining a Brazilian made car to the US, the Obvio! 828, that is a hybrid that can run on any combination of ethanol and gas. Zap is also the only car company who is selling a Chinese manufactured car in the US the 100% electric Xebra city car.