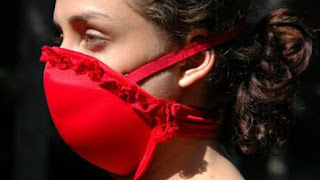 “The goal of any emergency respiratory device is to achieve tight fixation and full coverage. Luckily, the wonderful design of the bra is already in the shape of a face mask and so with the addition of a few design features, the Emergency Bra enhances the efficiency of minimizing contaminated bypass air flow,” explains the eBra website.

It sounds silly, but Bodnar, a Ukraine native who now lives in Chicago, started her medical career studying the effects of the 1986 Chernobyl nuclear plant disaster. If people had had cheap, readily available gas masks in the first hours after the disaster, she said, they may have avoided breathing in Iodine-131, which causes radiation sickness.

The bra-turned-gas masks could have also been useful during the Sept. 11 terrorist attacks, and for women caught outside during the dust storms that recently enveloped Sydney, she said.

Also on the public health front, there has also been progress made in identifying a genetic basis for many alcoholism cases:

Some people possess genetic characteristics that give them a low level of response to alcohol. That means they have relatively little reaction to booze and need a lot of drinks to begin feeling an effect. These people -- sometimes described as folks who can drink everyone else under the table -- are also more susceptible to developing alcohol addiction.

Now a gene that may influence the opposite response has been found. Researchers reported Tuesday that a variant of the gene CYP2E1 influences a person's response to alcohol. But this gene variant causes people to react with high sensitivity to alcohol. A drink or two leaves them feeling inebriated. About 10% to 20% of the population are thought to carry this gene variant. Other research shows people who react strongly to alcohol are less likely to become alcoholics.

The study was published in Alcoholism: Clinical and Experimental Research.

The somewhat counterintuitive fact that easy drunks are less likely to be alcoholics also appears to apply to a variety of dopamine response systems. People who only weakly generate dopamine as a reward for pleasurable experiences are most prone to extremes in seeking pleasure, for example, in a trait known as "novelty seeking", and association that has been documented since at least 1996. Indeed, that personality trait can be chemically induced with drugs that impair dopamine effects.

And, finally, DHA, a component of fish oil, doesn't actually produce the benefits that its advocated claim that it does (such as enhance brain function when taken by pregnant mothers), according to new research published in the Journal of the American Medical Association.

DHA, an increasingly common ingredient in prenatal vitamins and baby formula and taken as a supplement by pregnant women, failed to prevent postpartum depression or to enhance babies' cognitive development or language acquisition. . . . A welter of studies over the past decade has found that pregnant or breast-feeding women with higher blood concentrations of the fatty acid DHA, or docosahexaenoic acid, are less likely to suffer depression and more likely to have babies with better attention spans, sharper vision and earlier mastery of many skills. Most of the studies were small, preliminary and contradicted by later research[.]