It is not reassuring that the U.S. military's nuclear weapons arsenal is controlled by computers with 1970s vintage eight inch floppy disks.


[T]he Pentagon is planning to replace its floppy systems -- which currently coordinate intercontinental ballistic missiles (ICBMs), nuclear bombers and tanker support aircraft -- by the end of 2017. 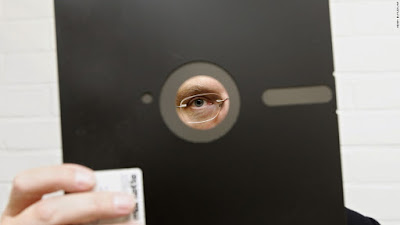 My children, who are just a few years younger than the soldiers using these antiquated computers have never even seen a computer using one.

Isn't the strategic nuclear force supposed to be one of the high technology parts of the U.S. military?

I thought it was bad when tanks and Stryker armored personnel carriers in the Iraq War had to rely on Microsoft Outlook and civilian cell phones to communicate with each other.  But, it turns out that this was actually rather sophisticated by Defense Department standards.
Posted 5:22 AM
Email ThisBlogThis!Share to TwitterShare to FacebookShare to Pinterest
Tags: bad administrators, Military, Rants, Technology

Wait, doesn't jingoism demand that you insert some nonsense about the U.S. military being the best goddamn fighting force ever known to man? And, that's even with 30-year old computers and buggy civilian coms!