Sikhs Are Not Muslims 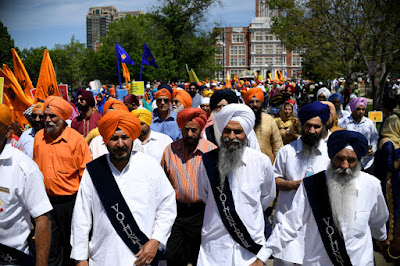 Denver's first Sikh Nagar Kirtan parade in front of East High School, in honor of their eternal guru. There are about 500 Sikh families in greater Denver and there are several Sikh places of worship with Sikh communities in Colorado (for example, in Colorado Springs and Boulder).

In the United States, if you see a someone with a beard and long hair wearing a turban, and possibly openly carrying a sheathed knife, there is a 98%+ chance that this person is a Sikh (a member of a monotheistic religion originating in territory of disputed sovereignty in Northwest India/Northeast Pakistan).  They are not Muslims.

Espanola, New Mexico and Los Angeles, California have a large share of U.S. Sikhs who are non-South Asian converts.

The first Asian American member of the U.S. Congress, Dalip Singh Saund, was a Sikh, and the current governor of South Carolina, Nikki Haley, was raised as a Sikh but converted to Christianity after she married.

Like the Hindu majority in India, Sikhs tend to be vegetarians.  But, "Sikhs are about equality, regardless of race, religion, caste or sex", in addition to prayer, serving the community, and hard work.

Instead, the people engaging in the discriminatory behavior and committing the hate crimes have prejudices against Muslims, mostly based upon the conduct of various radical Islamist Muslims. But, because religiously observant Sikhs in traditional Sikh garb are easily distinguishable, and a tiny minority of Muslims (almost all outside the United States) dress in a somewhat similar way, Sikhs are often mistaken for Muslims.

Thank you for posting this, it means a lot for us, our recognizance is the main motive , who we are