[Dr. Larry] Wolk is the executive director of the Colorado Department of Health and Environment. The agency says heroin overdose deaths have increased by more than 700 percent since 2003. New numbers show 157 people died from heroin in 2015, up from just 21 in 2003.

For context, I can say nothing that isn't captured in a beautiful blog piece entitled the Unnecessariat.


In 2011, economist Guy Standing coined the term “precariat” to refer to workers whose jobs were insecure, underpaid, and mobile, who had to engage in substantial “work for labor” to remain employed, whose survival could, at any time, be compromised by employers (who, for instance held their visas) and who therefore could do nothing to improve their lot. The term found favor in the Occupy movement, and was colloquially expanded to include not just farmworkers, contract workers, “gig” workers, but also unpaid interns, adjunct faculty, etc. Looking back from 2016, one pertinent characteristic seems obvious: no matter how tenuous, the precariat had jobs. The new dying Americans, the ones killing themselves on purpose or with drugs, don’t. Don’t, won’t, and know it.

Here’s the thing: from where I live, the world has drifted away. We aren’t precarious, we’re unnecessary. The money has gone to the top. The wages have gone to the top. The recovery has gone to the top. And what’s worst of all, everybody who matters seems basically pretty okay with that. The new bright sparks, cheerfully referred to as “Young Gods” believe themselves to be the honest winners in a new invent-or-die economy, and are busily planning to escape into space or acquire superpowers, and instead of worrying about this, the talking heads on TV tell you its all a good thing- don’t worry, the recession’s over and everything’s better now, and technology is TOTES AMAZEBALLS!

If there’s no economic plan for the Unnecessariat, there’s certainly an abundance for plans to extract value from them. No-one has the option to just make their own way and be left alone at it. It used to be that people were uninsured and if they got seriously sick they’d declare bankruptcy and lose the farm, but now they have a (mandatory) $1k/month plan with a $5k deductible: they’ll still declare bankruptcy and lose the farm if they get sick, but in the meantime they pay a shit-ton to the shareholders of United Healthcare, or Aetna, or whoever. This, like shifting the chronically jobless from “unemployed” to “disabled” is seen as a major improvement in status, at least on television.

Every four years some political ingenue decides that the solution to “poverty” is “retraining”: for the information economy, except that tech companies only hire Stanford grads, or for health care, except that an abundance of sick people doesn’t translate into good jobs for nurses’ aides, or nowadays for “the trades” as if the world suffered a shortage of plumbers. The retraining programs come and go, often mandated for recipients of EBT, but the accumulated tuition debt remains behind, payable to the banks that wouldn’t even look twice at a graduate’s resume. There is now a booming market in debtor’s prisons for unpaid bills, and as we saw in Ferguson the threat of jail is a great way to extract cash from the otherwise broke (thought it can backfire too). Eventually all those homes in Oklahoma, in Ohio, in Wyoming, will be lost in bankruptcy and made available for vacation homes, doomsteads, or hobby farms for the “real” Americans, the ones for whom the ads and special sections in the New York Times are relevant, and their current occupants know this. They are denizens, to use Standing’s term, in their own hometowns.

There is much, much more in the linked blog post.  Finally, an image from a related post on the futility of entrepreneurship as an alternative is too amazing not to post: 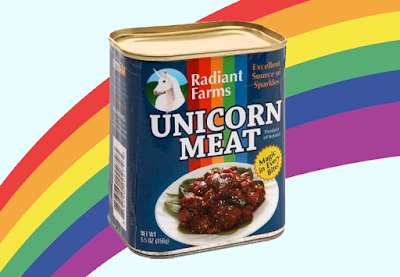