Urban farming likely won't ever provide cities with all that many calories. And the environmental advantages are … debatable. But urban farms can provide a bunch of other neat benefits, from bolstering local communities to (sometimes) encouraging healthier diets. They can also give city-dwellers a better appreciation of how our food system works, which is less nebulous than it sounds.

I've long been an urban farming skeptic, because I know that urban farming doesn't make sense from an efficiency or environmental perspective.  But, my brother's family has tended a plot in an urban garden and I do see the community building and educational upside of this activity.

I have made a number of posts on the transgender phenomena which I may link to this post as some point.

Many people who have encountered a gay or lesbian person, or at least have a somewhat realist idea from popular culture what that involves, really have no idea what a transgender identity means, even in Colorado which is home to Trinidad, a national center for gender reassignment treatments. I first met "out" gay and lesbian individuals in college and my children know people who are "out" gays and lesbians in high school.  But, I was in my 30s or 40s before I personally met any transgender people.  I did so through Denver politics and through my law practice as several of my clients are transgender.

Honestly, once you get it, a transgender identity is really much more straightforward to understand than a gay or lesbian sexual orientation.  You have a body that fits one gender, but, usually from a very young age, you are mentally a member of the other gender fall all intents and purposes.

The webcomic Misfile, in which a lazy angel accidentally puts a boy's file in the wrong gender filing cabinet in heaven, while obviously not the true cause of the phenomena (whose exact cause isn't well understood even though it is clearly real), captures the idea perfectly.

The good news about the lack of wide public knowledge about transgender identities, is that there is considerable room for basic, factual education to change opinions, which is impossible in the case of many other high profile controversial issues where the culture wars rage on despite people knowing the facts.

Also, it turns out that today is the International Day Against Homophobia and Transphobia.


Just as extreme Shi’ite Muslims hold that Archangel Gabriel made a mistake, delivering the Message to Mohamed when it was intended for Ali, so Marxists basically like to think that the spirit of history of human consciousness made terrible boob. The awakening message was intended for classes, but by some terrible postal error was delivered to nations. It is now necessary for revolutionary activists to persuade the wrongful recipient to hand over the message, and the zeal it engenders, to the rightful and intended recipient. The unwillingness of both the rightful and the usurping recipient to fall in with this requirement causes the activist great irritation…

4. The rich haven't just captured the growth in personal income attributable to innovation.  They have also captured more than their share of the consumption benefits of it. In economist speak: "Annualized quality-adjusted inflation was 0.65 percentage points lower for high-income households, relative to low-income households."

5. New Zealand takes civility in legislative debates much more seriously than we do. For example, the Prime Minister there was recently temporarily ejected from the parliament room for repeatedly speaking when it wasn't his turn.

6. There may not be right answers in economics, but Venezuela demonstrates that there are clearly wrong ones.

7. Hillary Clinton and Donald Trump are both perceived in a very negative light. 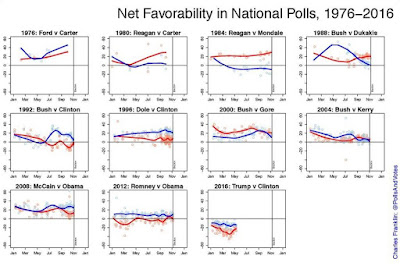