Today's Combat Helmets Are Better Than They Used To Be 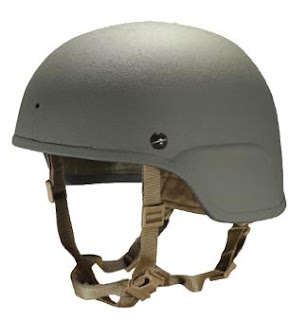 U.S. troops started using the ACH, a helmet with basically the design above, in 2005, and this year will start receiving an upgrade, the LW-ACH, which is 10% lighter (3 lbs instead of 3.3 lbs), has a slightly more stable fit, and is a bit more protective. The light and strong wonder-material Kelvar provides the protection.

When it works, it is the difference between death or severe brain damage, and life with a possible mild concussion.  And, since it is lighter and more comfortable than pre-2005 designs, soldiers are more likely to be wearing it when it matters. This means fewer soldiers die when the U.S. goes to war.

Combat helmets date to ancient times and those designed to stop shrapnel and bullets date to around the time of World War I.  But, the technology has improved by fits and starts with several major innovations and more minor ones, over time.

Heavy "slug throwers" using ordinance bigger than a 40mm grenade cannon are steadily being replaced by what amount to guided missiles. It is only a matter of time before conventional howitzer and tank rounds (historically 76mm (about 3") to 203mm (about 8")), and naval guns (historically 76mm (3") on frigates to 406mm (16") on battleships) are gone.

The inferior accuracy and range of these weapon systems (about 13 miles at most for a conventional 5" naval gun or 155mm howitzer round, both of which are not that accurate at the edge of their range) relative to comparable sized missiles (which tend to have somewhat larger and much more expensive rounds, but smaller systems to launch them) have made these heavy slug throwers largely obsolete.

Already, the largest slug thrower rounds in U.S. naval service are 127mm (5") naval guns down from 16" on some U.S. battleships.  Similarly, the M2 Bradley which is armed with a small compliment of small anti-tank missiles, destroyed as many Iraqi tanks in the first Gulf War as the M1 Abrams main battle tank which has a 120mm (almost 5") main gun (the largest direct fire round in U.S. military service).  The M1 is still used by the U.S. Army, but in much lower quantities relative to the total force than it used to be as this tool has proved less useful relative to the alternatives.

The U.S. is upgrading its self-propelled 155mm howitzer system for the first time in twenty years starting this year. The new system is the M109A7 PIM (Paladin Integrated Management)), with a planned buy of 580 of the systems, prior to any mid-purchase budget cuts and down from the 929 M109A6s currently in U.S. service.  The new PIMs are expected to remain in service until 2050, but this may be the last conventional howitzer ever fielded by the U.S. Army. The original Paladin M109 entered service in the Vietnam War. Two previous more significantly redesigned howitzer systems, the Crusader, and the Non-Line of Sight Cannon of the Future Combat System program, were cancelled in the meantime. And, the M982 Excalibur precision munitions with a 40km range that are included in the choice of ordinance for the new howitzer are guided weapons that are more missile than slug, and many other howitzer and mortar rounds are now "rocket assisted."

The PIM project is being praised not for combat qualities, but primarily for its cost-efficiency. According to Military-Today website, the new self-propelled gun “shares engine, transmission, tracks and some other components with the Bradley infantry fighting vehicle. Such commonality allows to reduce production, operating and maintenance costs.”

Laser weapons and other kinds of anti-missile ordinance (such as that used by the Phalanx Close in Weapons System) designed to shoot down incoming heavy ordinance en route, and "reactive armor" is replacing conventional armor. State of the art missiles can almost always routinely defeat the heaviest armor of their intended targets (including the heaviest tanks, submarines, warships and bunkers) while retaining a manageable weight. Even infantry defending against ambushes have focused on technologies designed to identify to location and type of incoming fire instantly and return fire.