How Often Are Crimes That Are Reported Solved? 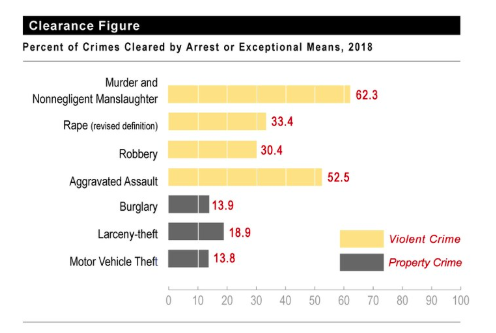 From the FBI's Uniform Crime Report for 2018.

"Exceptional means" involves cases where a crime is solved but an arrest is not made, for example, due to the death of the suspect or lack of cooperation of a witness.
Posted 3:08 PM
Email ThisBlogThis!Share to TwitterShare to FacebookShare to Pinterest
Tags: Crime, Criminal Justice

District Judge Allison Burroughs, who was named to the bench by President Barack Obama in 2014, the same year the lawsuit was filed, ruled that Harvard did not violate federal civil rights law by using race and ethnicity as factors in the admissions process.

a liberal supreme court will uphold race based affirm action.

i infer based on your past posts this is what you want. black children of billionaires enjoying affirmative action over poor asian immigrant students from poor war torn countries and poor whites. you want to stack the SC court with liberal justices like Allison Burroughs as you see it dominated by 5 "far right" justices

Not talking about affirmative action in a comment to this post. Way too far off topic. I've written about it before, if you want to see what I've actually said rather than merely inferring anything. https://washparkprophet.blogspot.com/search?q=affirmative+action&max-results=20&by-date=false

do you even respond to your old posts comments?

i know its off topic but your recent post was about how to pack the SC with liberal justices. the far right SC you wrote of are committed to interpreting the constitution as written.

how would a SC justice who interprets the Constitution as written, esp 14th amendment, rule on race based aff action?

I actually do respond to old post comment (but not as quickly, more like one a week to once a month, mostly because I scan them to keep them spam free). I welcome suggestions and may write about the Harvard case.

How do I get my child into an Ivy League school?

Which high school has the most Ivy League?


from the news article this black teen got accepted to all elite schools, but his test scores and gpa were not elite, and he was not an american black decedent of slavery but the offspring of african immigrants.

do you think racially homogenous nations like japan and korea should have affirmative action for blacks?