Too Many Federal Judges Are Former Prosecutors

Sitting federal judges are disproportionately former trial attorneys for a governmental entity. CATO thinks that it a bad thing as it explains in the linked essay. So do I. 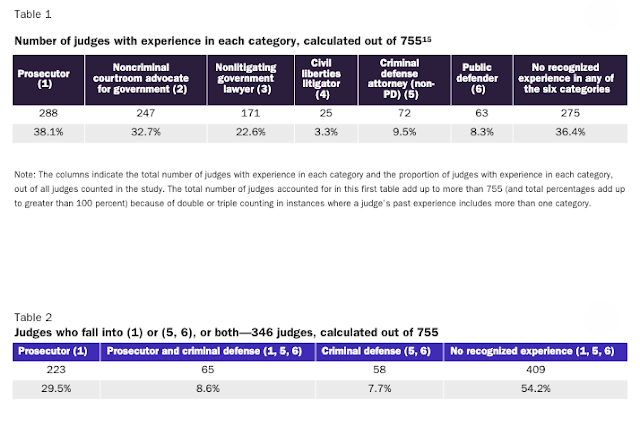 Focusing just on former prosecutors versus former criminal defense attorneys (including but not limited to public defenders), the ratio on the federal bench is 4 to 1. Expanding the scope to include all former courtroom advocates for the government (but not other kinds of government lawyers, such as agency heads and general counsels), and comparing that to former public defenders, private criminal defense attorneys, and public interest lawyers, the ratio jumps to an astonishing 7 to 1. President Donald Trump’s judicial nominees, many of whom are committed originalists and supporters of constitutionally limited government, reflect these same ratios.

What this means is that if you enter the federal legal system as an adversary of the government—including as a criminal defendant or a civil-rights plaintiff—the likelihood that the judge in your case will have previously served as an advocate for government is approximately 50-50. Meanwhile, the odds of drawing a judge who worked as a criminal defense attorney or public interest lawyer against the government (and never as a government advocate) are about 1 in 16. From the standpoint of someone whose liberty—or even life—hangs in the balance, those are suspicious and troubling odds.

From here based upon this CATO Study.
Posted 3:54 PM
Email ThisBlogThis!Share to TwitterShare to FacebookShare to Pinterest
Tags: attorneys, Courts