Who Gained From PG&E Skimping On Maintenance And Who Will Pay For The Consequences?

Pacific Gas and Electric (PG&E) has been in the spotlight for ignoring routine maintenance of remote power delivery infrastructure that has caused major California wildfires in a manner that has benefited shareholders, and it is true this has provided slight benefit to its stockholders.

Those gains were no doubt a pretty modest share of total profits, however, which were spread over many income oriented, risk averse utility stock and bond investors over many years. And, those profits weren't outrageous.

How much of a profit have PG&E shareholders made over the years?

As a regulated utility, PG&E's profit margin, percentage-wise, has been steady, but nothing to write home about either. The rates it can charge and the expenditures that it can make are all heavily regulated. 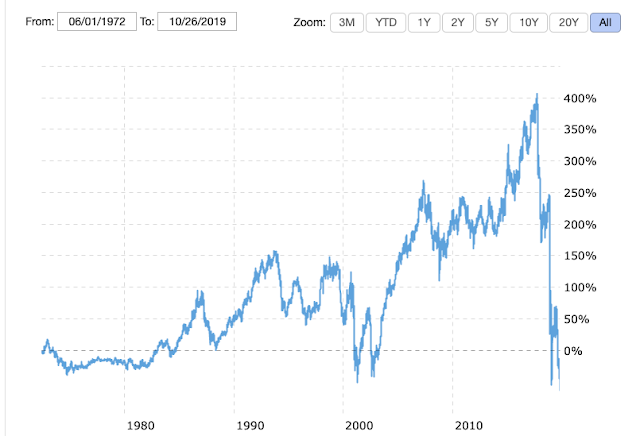 PG&E has gone bankrupt as a result of the liability caused by the mass wildfires it caused (which raises the question of why its stock is worth anything at all):

PG&E filed for bankruptcy in January after amassing tens of billions of dollars in liability related to two dozen wildfires in recent years. As speculation grew that its equipment might be the cause of the Kincade Fire, its stock price plummeted about 30 percent on Friday to $5.08, a small fraction of its 52-week high of $49.42.

Dividends on PG&E stock in the last decade or so have ranged from 3.1% per year to 4.5% per year.

So, the total inflation adjusted return from stock and price appreciation in dividends in PG&E has been on the order of 2.1% to 3.5% per year until the summer of 2017 (at 45 year run), and its recent stock price collapse has turned that into a -0.9% to +0.4% per year total return on average over the past 47 years.  The total return including the recent collapse has been worse than investing in risk free treasury bonds (which have returned an inflation adjusted 2.6% per year since 1972), and has been fairly similar to Treasury bonds in the long run excluding the recent collapse.

PG&E currently bonds pay 2.45% per annum (of which there are about $27.6 billion outstanding) which is better than a savings account, but currently carries a significant risk of a default that will wipe out decades or more or interest payment returns and perhaps principal investments as well. Current market prices for PG&E bonds imply that the markets believe that current bondholders are likely to lose on average about 11% of their investment in a bankruptcy from a looming liability for the California wildfires on the order of $30 billion or more.

There is insurance in place, but the $1.4 billion policy limits that are only a tiny fraction of the $20-30 billion plus of liability incurred. But, individual property owners and businesses probably also have insurance that will cover much of these losses (that, in turn, have subrogation liability claims against PG&E which probably can't be recovered in full, PG&E made an $11 billion settlement of subrogation claims for the 2017 and 2018 fires), at the cost of driving up insurance rates for future casualty insurance policies.

Future rate payers will have to pay the balance of the damages and will have to restore the infrastructure lost. 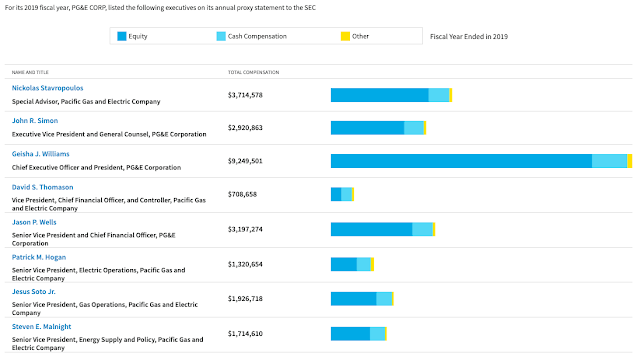 By far the most culpable parties in all of this are the PG&E executives who made policy decisions to skimp on maintenance. And, the entire PG&E executive team is predominantly compensated with stock and stock options and will take a huge hit personally (on a percentage basis) as a result. They deserve this but the total amount of their stock and stock option based compensation is still only in the tens of millions of dollars per year combined ($19.45 million for the top eight highest paid employees in the most recent year, who receive an outsized share of all stock and stock option based compensation in the company), which is on the order of 0.1% of the total loss. This pales compared to the $30 billion plus loss from the wildfires due to their poor management decisions.

Also, while conventional private law analysis puts liability for essentially all of the PG&E caused wildfire losses on PG&E, that lack of maintenance isn't the sole cause of the harm.

Some of it is attributable to climate change making California more arid and hence more at risk of fire (for which PG&E is arguably one of the biggest contributors in California, so it isn't necessarily unfair for it to bear this part of the risk) and some of its attributable to increased population density for which responsibility should, in fairness, be more widely shared, although the role of individual property owner and business insurance coverage in paying for the losses does distribute that burden somewhat.
Posted 6:59 PM
Email ThisBlogThis!Share to TwitterShare to FacebookShare to Pinterest
Tags: Bankruptcy, Climate, Corporations, Economics, private law