The Approximate Global Distribution Of Wealth

This is a nice way to present data on a logarithmic scale without alienating the math-phobic. Of course, as the comment to the low end entries indicates, there are actually lots of people who have a negative met worth and not just a minuscule one.

A net worth number of "7" is notable because in my experience that is the point at which it becomes hard to spend more than your investment income because everything you start to buy at that point retains much of its value rather than instantly evaporating in value like a vacation or a party. Instead, you start buying things like condos and valuable art that hold steady in value, or go up in value, instead of depleting your net worth.

There are myriad definition issues hidden below the naively simple surface of this chart, but the general impression that it provides isn't deeply wrong although the margin of error on the number of people in each category is significant (perhaps up to plus or minus 50% in some categories). An accompanying pie chart to show the percentage of global wealth in each category would have been helpful, but there is some text in the story from which this chart was derived discussing that point:

[I]n 2018, the world’s wealthiest 26 individuals had the same amount of wealth as the poorest half of the population, according to an Oxfam report published in January. That’s down from the 43 wealthiest people the year before. During the same period, the wealth of the world’s billionaires increased by $900 billion ($2.5 billion per day), while the wealth of the poorest half of the population (3.8 billion people) fell by 11%, the Oxfam report found. 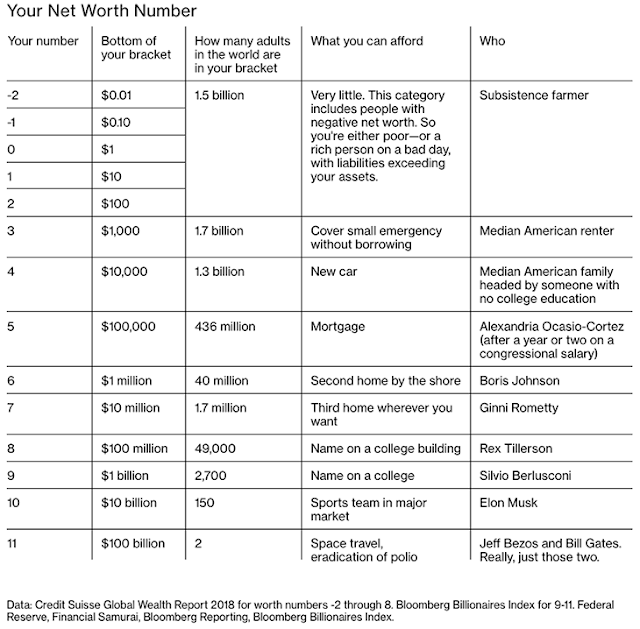 Posted 9:11 AM
Email ThisBlogThis!Share to TwitterShare to FacebookShare to Pinterest
Tags: Economics