Why Are Red States Economic Failures? 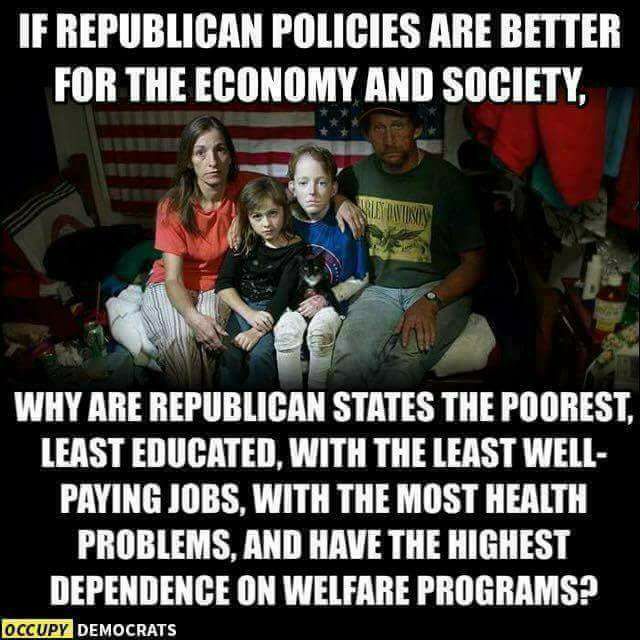 The big issue here is cause and effect.

Are Red States less affluent because the implement bad policies, or is this a consequence mostly of having people with deep rooted cultures that are ill adapted to current conditions that lead to weak economies and poor policies?

It is certainly true that even elite policy actors frequently are mistaken about why good policies work and why bad policies don't, even when they are right about what policies are good and bad. This often leads to bad solution to real problems.


Razib Khan has noted that lack of support for public libraries in the South that is alive and well today, and outright large rates of illiteracy and poor support for education, dates back to the 1850s at least.

From Theodore Parker’s The great battle between slavery and freedom (1856):

A cultural anti-intellectualism is absolutely a barrier to good policy, especially when the gut instincts of a culture run counter to what makes sense as good policy today, even if it was adaptive in the circumstances in which it arose.

On the other hand, policy differences can lead to immense differences over multi-decade time scales, even in places that once shared a common culture.

South Korea thrived, while North Korea has sunk into squalid totalitarianism. Germany's division into East and West left the West much better off, despite the fact that historically, the economic divide in Germany was between Northern Protestant German and Southern Catholic Germany. The Middle East looked like it had a bright future in the 1970s, and then regressed into religious fundamentalism that also damped the quality of life more generally.

Also, politics, because it is basically a fight for control over monopoly control over everything, can give rise to situations where the incentives of the key actors lock them into a suboptimal state that is very hard to upset from within.

The worst countries in the world, like North Korea, are not necessarily the least stable politically. And, as scores of independence movements and revolutions that were initially successful in the 19th and 20th centuries have taught us, seemingly positive political and economic reforms are often short lived, and degenerate into one party states, dictatorships, or even, as in  the case of North Korea, de facto monarchies.
Posted 11:24 AM
Email ThisBlogThis!Share to TwitterShare to FacebookShare to Pinterest
Tags: culture, Economic Development, Germany, History, Korea, North Korea, Political Identity, Political Theory, Republicans