The federal estate tax is currently scheduled for repeal in 2010, and then reinstatement in 2011 with higher rates and smaller exemptions than are in place now. No one believes this nutty scenario is actually going to happen, but this status quo and a budget deficit projected by the CBO to exceed $400 billion in 2006 have given Democrats leverage in the debate over the future of the estate tax. The uncertainty also wrecks havoc on people in my profession, estate planning, who are forced to read tea leaves to plan a mere four years in advance.

A compromise now seems all but certain, and the outlines of a deal are shaping up. It will exclude more estate entirely from the estate tax, and lower rates, although the exact dimensions of the deal are unclear. According to Bloomberg, via the Tax Profs Blog,Charles Grassley, the Iowa Republican who chairs the Senate Finance Committee (the most crucial strangle point for estate tax legislation right now):

If we could get a $5 million exemption with a 15 percent rate, I think that would be a decent compromise. That's not going to satisfy the president, but I think that that's the best I can do in the United States Senate in order to get the votes to get it passed.

Democrats are willing to bargain for lower estate tax rates and higher exemptions, but aren't big fans of estate tax cuts which are proto-typical classic tax cuts for the rich. But, they do tend to favor a higher exemption and a higher top rate, while Republicans are more concerned about lower the highest estate tax rate. Estates between $1,000,000 and $5,000,000 generate only a very small portion of estate tax revenues, but account for a large share of all estate tax filings. A very large share of estate tax revenues comes from a small number of estates in the $100,000,000 and up range. Thus, a substantial increase in the exclusion doesn't change revenues very much, while even modest reductions in rates have a big revenue impact.

Back in September, a report on the negotiations over the estate tax stated:

Given that Grassley is still in negotiations and that the pressure from Democrats and deficit hawks is to make estate taxes take a heavier bite, I think that the $5,000,000 is a pretty safe guess of what the ultimate exemption deal will be, and that 15% is more of a floor than a sure bet on what the ultimate legislation will contain as a top tax rate.

My personal philosophy is that the estate tax is a tax in lieu of an income tax for purposes of administrative simplicity, on the inheritance income of wealthy heirs, similar to the tax imposed upon lottery winners, so I would favor a tax rate equal to the highest individual income tax rate, currently 35% and think that a $5,000,000 threshold would be a reasonable one, because it reduces the cost of collecting the tax (public and private alike) so much, while having only a modest revenue impact. This would still be a major tax cut from the $1,000,000 and 55% status quo for 2011, and from the $2,000,000 and 46% in place right now, but would also keep a reasonable estate tax in force.

Any reform should also include the reinstatement of the state estate tax credit, which allowed states to receive a cut of federal estate tax revenues without imposing any planning burdens on taxpayers and without engaging in any material efforts to collect their share. Its elmination has produces a huge morass of state level estate taxes to replace a relatively simple federal one.

The Democrats concern about rising inequality in our economic doesn't come from nowhere. The benefits of economic growth in the past couple of decades have not been shared equally. 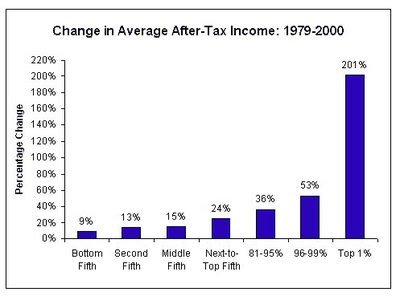 The tax provides 1.2% of federal receipts.

There are 2.4 million deaths annually, but only 0.6% of estates file returns and only 0.3% pay estate taxes. Prior to the 2001 tax cuts, 2% of estates paid an estate tax. More than 95% of businesses and farms will never be affected by the estate and gift tax, and many of those that do have sufficient liquid assets to pay the tax.
Posted 10:10 AM
Email ThisBlogThis!Share to TwitterShare to FacebookShare to Pinterest